If you started the New Year like I did, you took some stock of your personal and professional spaces – including your desk – and did some organizing and maybe some purging.  Lots of us keep objects on our desks that serve in all multitude of manners. Of course, there are the functional objects – the staplers, the pens, the notepads and the power cord organizers; but there are also the symbolic objects – talismans, relics, heirlooms, artifacts, mementos and so on. And there are no shortage of musings and essays on the internet about the desk object as a means of self-expression. 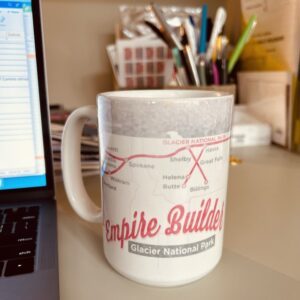 For me, the most noteworthy object (both functional and expressive) is my “Empire Builder” coffee mug, gifted to me by a team member at a Kendeda staff retreat in Glacier National Park several years ago. He boug

ht the mug at a local gift shop (or was it shoppe?); in this case, “Empire Builder” refers to the Amtrak train route that traverses the Lewis and Clark trail from Chicago to the Pacific Northwest, stopping in Montana’s Big Sky country along the way.

I love this mug because it was offered to me in typical Kendeda team fashion – with a lot of love, with some irony and humor, but ultimately with a serious message in its gifting.

I came to Kendeda in 2012, and relatively quickly was given a large mandate by our founder.  She wanted to spend out the Fund in a reasonable time frame. She wanted to be less involved in the day to day running of the organization. She wanted to invest in a broader range of issues. And she wanted to maintain Kendeda’s core orientations (limited structure, grantee-focused, learning-oriented, and human-centered).

At that point, the Kendeda team consisted of our founder (a diligent participant but hardly oriented as a full-time executive); her financial planner who moonlighted, quite effectively, as her Atlanta-based program officer; an experienced consultant who focused on the founder’s broadly defined interests in nature, national parks, climate change, conservation, green building; and me, running a newly created girls’ rights portfolio.  As we added portfolios and began orienting the work in a more public-facing way, we also brought on new team members (five to be exact) bringing our merry band to a grand total of nine. Along the way consultants became staff members, we launched our first website, we chose an official font. We got our first office, then our second.  Swag was purchased.  We even had business cards (how quaint).

Also along the way – as I presented job descriptions, compensation philosophies, brand guidelines and operating budgets to our founder – I was always (always) met with encouragement, support and good cheer, along with some good old-fashioned teasing. “It’s our weekly team meeting, let’s see who Dena has added to the team this week!” she would often say. Or “Do you think we’ll even know everyone at our next team dinner?” At some point, the Empire Builder mug became more than a coffee vessel. It was a gentle chide.

We all understood that to give away the amount of money our founder wanted us to (ultimately more than one billion dollars in grants), in the way she wanted us to, to the broad array of areas she wanted to, adding capacity was a reasonable (though certainly not the only) course to chart. Moreover, we realized our totally anonymized approach may have outlasted its usefulness. We could, with care and thought, do more good for our grantees and our issues by having a bit more of a public presence.  And so we built.  Maybe not quite an “empire,” but certainly more structure than existed prior.[1]

And yet…the mug. It always served as my constant reminder, a tongue-in-cheek, finger-waggling symbol of what Kendeda wasn’t there to do. We aren’t here to center ourselves as an ongoing institution (more on that here). We aren’t here to build a large staff to make presentations look pretty or to tend to a large office. Instead of investing in a complex and expensive monitoring and evaluation team, we invested in grantees’ desires to develop their own self-guided learning and evaluation systems and capacity. Those types of investments will live beyond us, we believe.

Our approach to adding to Kendeda’s structure and capacity has always been to do it with the lightest touch, with an understanding that we are an impermanent institution – here to make a difference while we can, yet mindful that our work won’t endure forever like other foundations who choose to operate in perpetuity. When you get right down to it, it’s safe to say that we have tried to fashion ourselves as the anti-Empire Builders, in the spirit of some key phrases in a traditional Jewish prayer, the Unetenah Tokef:

Each of us is a shattered pot, grass that must wither, a flower that will fade, a shadow moving on, a cloud passing by, a particle of dust on the wind, a dream soon forgotten.

And my “Empire Builder” coffee mug, used as I sleepily greet each morning, serves as my metaphorical, tongue-in-cheek nudge and daily caffeine-infused reminder of why we’re here.

[1] Our operating costs have never exceeded more than 3.5 percent of our annual grantmaking – pretty lean by industry standards.