Each year, Atlanta’s philanthropic community invests millions of dollars to make improvements in education, health care, housing, economic development, and much more — united in a desire to make the city a better place to live.

These charitable contributions come from all corners: large philanthropies, family foundations, businesses, churches and Atlanta residents making both big and small donations. The investments help to build a stronger city and are vital to advancing progress and community well-being.

But the efforts these donations support are undermined by a public health crisis facing our city and so many others across the nation: gun violence.

Tragically, 2021 is on pace to be a historically deadly year in Atlanta, with police investigating 79 homicides as of late July, up from 67 at the same point in last year — which saw 157 homicides in total, the most in more than two decades.

Initiatives to improve youth, family, and community well-being cannot fully succeed if Atlantans are unable to go about their daily activities free of violence and harm. When we feel safe in our neighborhoods, we are more likely to thrive and contribute to stronger, healthier communities. Research bears this out, showing that reducing gun violence has many positive effects, including some that aren’t immediately obvious, such as improved economic activity, increased school attendance and fewer youth involved in the child welfare and juvenile justice systems. 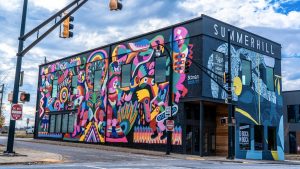 That’s why Atlanta’s robust charitable community must be part of the solution to end gun violence.

We need to do what we know will work: invest in expanding public health approaches that examine the root causes of conflict, act to stop shootings before they happen, and promote healing after gun violence occurs.

There’s already a movement among some funders, including the Annie E. Casey Foundation and The Kendeda Fund, to support these community-based violence interventions in the communities that encompass Neighborhood Planning Unit V (NPU-V) on the city’s Southside. In partnership with government officials, community nonprofits, and other local leaders, funders have:

At a July 16 event, Atlanta Mayor Keisha Lance Bottoms noted that the NPU-V neighborhoods supported by the city’s Cure Violence program have seen a 50 percent drop in violent crime. She also called for more investment — including from the philanthropic community — to expand the model across the city.

Atlanta’s Cure Violence program works because it is rooted in the community. It is a “bottom-up” strategy that was planned, designed, staffed, and led by the residents it aims to serve and protect. By reducing violence in NPU-V, the Cure Violence program has ensured that more Atlantans are with us today who can contribute to their families and the well-being of their neighborhoods.

Fortunately, there’s also growing recognition among public leaders that these programs work. In June, the Atlanta City Council approved Mayor Bottoms’ proposal to use $5 million in federal funds from the American Rescue Plan to expand community-based violence interventions in the city — an approach the Biden administration has encouraged many other local governments to pursue as well.

These are all important steps toward creating safer communities, but additional investments are needed to take these programs citywide. The more funding and support they receive, the better they can be implemented, and the more lives they will save.

Now is the time for charitable Atlantans to recognize gun violence for the public health crisis that it is and begin investing in efforts to support, study, and implement proven community-based violence interventions. The challenges are well understood, and the solutions are within reach.

Donors big and small must help solve Atlanta’s gun violence epidemic. Our safety and our future depend on it.