While the harmful practice of child marriage has endured for millennia, action by philanthropy, nonprofits, and others to confront this complex human-rights problem have gained significant traction during the past decade.

In some parts of the world, child marriage rates are declining. But not by nearly enough. Continued work on this problem is essential since, for many girls, child marriage is the equivalent of a jail sentence. It often amounts to the end of a girl’s education, strict control over her freedom and mobility, and domestic violence.

As an advocate for the rights of girls and women, the Kendeda Fund is dedicated to doing all we can to help end child marriage and support girls and women in building independent lives. We are relatively new to this work, but we’ve been engaged long enough to recognize that good intentions don’t always lead to good strategy. 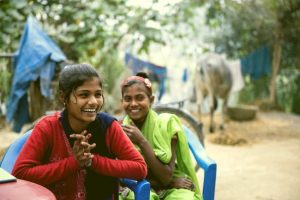 A new report reveals the challenges that have come as many well-meaning organizations overlook what matters most. “Tackling the Taboo: Sexuality and Gender-Transformative Programmes to End Child, Early and Forced Marriage and Unions,” commissioned by a group of 12 leading organizations working to end child marriage around the globe, explores how patriarchal control of adolescent girls’ sexuality fuels child marriage and why so few organizations have even acknowledged this challenge, let alone tried to address it.

The report presents findings from a review of 23 organizations — mostly in South Asia and sub-Saharan Africa — that are working to transform the social norms about gender and sexuality that drive child marriage. And the takeaways offer new insight into how we can more effectively confront this vexing cultural crisis.

In communities around the world where patriarchal gender norms are strictly enforced, people are extremely constrained in their freedom to express their sexuality. The social value of girls lies in their virginity; if they have sex before marriage, they are seen as bringing shame on themselves and their families.

Because these communities view marriage as the only socially sanctioned scenario for sexual activity, families feel pressure to marry girls off at — or before –—sexual maturation, regardless of their hopes for the future. In this context, sexuality often remains the “elephant in the room,” a cultural taboo to be avoided at all costs. Even the best-intentioned organizations often find ways to focus on other reasons child marriage persists, such as poverty, while ignoring the fact that the real problem is how women are not treated equally to men, especially when it comes to sexuality.

If we don’t recognize child marriage as a deeply entrenched manifestation of gender inequality and set out to end destructive views on adolescent sexuality at their root, then child marriage will continue to dramatically curtail girls’ rights and their potential to lead successful fulfilling lives.

Grant makers can make a difference by funding programs that overcome the sexuality taboo and promote equality. Among the key steps that can take:

Challenge organizations to integrate sexuality education into their child-marriage work.

Many organizations have already started groundbreaking efforts that we can learn from.

The Trust for Indigenous Culture and Health works with young people in Kenya to demystify sex, presenting it as a positive aspect of life and providing ways for adolescent girls and boys to get accurate, nonjudgmental answers to their questions about sex. The Trust’s programs use art, meditation, and other activities to encourage young people to reflect on equality in relationships, contraception, safe abortion, female desire, consent, and gender diversity. The Trust has a deep understanding of how norms about gender and sexuality are embedded in local culture. Compared with large, international organizations, the Trust’s program leaders have a better perspective on ways  to mitigate community backlash.

As grant makers, we should make funding of grassroots organizations like the trust a higher priority.

Invest in programs that focus on building girls’ skills and perspectives

Efforts to curb child marriage must help girls expand their options beyond marriage to make their own choices and to pursue their own dreams. This requires helping girls develop concrete skills so they can enter the work force, access financial resources, and establish greater independence. It also depends on fostering girls’ awareness of their circumstance and expanding their capacity to challenge the social norms that put them at a disadvantage in the first place

Some of the organizations in “Tackling the Taboo” found creating girls’ collectives to be an effective way to build their political awareness and support them to use their collective power to advocate for change. The Awaaz-e-Niswaan (Voice of Women) collective in India, for example, reported success in empowering Muslim girls to persuade their parents to let them delay marriage and stay in school. The International Centre for Sexual Reproductive Rights in Nigeria runs a girls’ leadership program grounded in feminist principles that equips girls with the skills and perspective to advocate for laws and policies that protect their rights. Graduates of the program report greater self-confidence and say they are likely to speak out against violence and to delay marriage.

Building girls’ ability to envision change in their lives, however, does not make it their responsibility to dismantle entrenched, harmful social norms on their own. “Tackling the Taboo” highlights organizations that also engage men and boys in the struggle for gender equality. The YP Foundation, an organization run by young people, for example, works with young men and boys in India to encourage them to analyze power and patriarchy, recognize their own privilege in society, and reject it while also holding other men and boys accountable for the way they treat women and girls.

As grant makers, we should give priority programs that lift up female self-determination while also supporting those that engage men and boys as allies.

Many organizations in “Tackling the Taboo” noted how the short-term, project-based funding so common in philanthropy makes it harder to work for the long-term, sustainable change in social norms that eradicating child marriage requires. Short funding cycles all too often prompt organizations to pursue superficial results.

Many people in the fight to end child marriage are focused on surface-level or temporary indications of change, such as the number of young women who stay in school or the total who avoid marriage in their early teenage years. If we can just keep girls in school longer and delay their marriages until they are 18, so the thinking goes, we will solve this issue. While no doubt a win, without longer-term accompaniment, the overall outcome tends to be slightly more educated child brides.

Another approach that simply delays the problem is also all too common: Some international organizations provide families financial incentives — such as cash or cows — as long as they promise to refrain from marrying off their daughters until they turn 18. But when the cash stops on their 18th birthday and the girls are married, has anything really changed? Has gender equality been achieved or the girls’ freedom and life choices expanded? Probably not.

Based on what we’ve learned during our time making grants to deter child marriage, it takes a willingness to work over the long haul to transform social norms, build girls’ skills so they can earn and keep financial resources, and strengthen health and education systems to better meet girls’ needs.

Such change is not always clean or linear, but it’s the type of change that will transform the lives of millions of girls around the globe.

This article was originally published in the Chronicle of Philanthropy on August 14, 2019