Atlanta’s booming economy is a key feature of the city’s confident self-image as a forward-looking, welcoming metropolis. But if growth is not carefully managed, it bears a high cost. Gentrification, displacement, inequitable redevelopment and widening income disparity can make it even harder for already marginalized communities to share equally in the city’s ascendency and threaten Atlanta’s status as the South’s ladder of economic opportunity.

Like many Southern cities, Atlanta has arrived at an important crossroads, according to Tené Traylor, The Kendeda Fund’s Atlanta fund advisor. 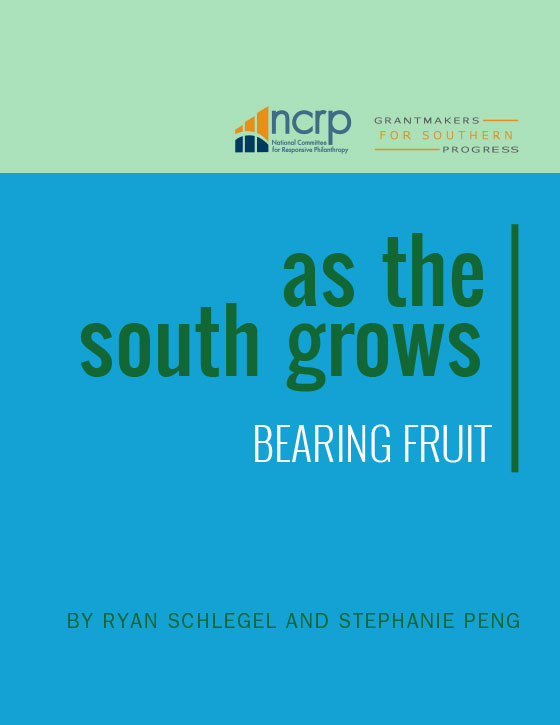 “The trajectory of Atlanta’s growth offers an opportunity for local philanthropy to lean in and invest in building power in marginalized communities,” Traylor explained. “This is the time for benevolence reimagined, for building a city where equity is not a fringe effort but an essential and elevated philanthropic strategy. Our goal should be to make Atlanta a place where existing and new equity organizations and champions coalesce as a community to influence the established systems that effect our social, political, economic and natural environment.”

Atlanta’s many assets are attracting new investments to the region, but those assets are not flowing in an equitable fashion, Traylor said. “Big business is booming and the city is experiencing unprecedented growth. We are headquarters to multiple Fortune 100 companies who support an extremely strong business sector. Thanks in large part to a responsive philanthropic community, we have a strong safety net hospital in Grady and a thriving arts scene. Yet at the same time, the city is divided by Interstate 20, with wealthier, majority-White communities to the north of the interstate and poorer, majority-Black communities to the south.”

In Traylor’s view, Atlanta’s test is to ensure its assets are developed in ways that genuinely advance economic inclusion and not just growth. Since 2000, the number of high-poverty neighborhoods in Metro Atlanta has tripled. As Atlanta has grown and spread, so have its disparities.

For The Kendeda Fund, increasing economic opportunity means supporting transformative leaders and ideas that enhance or reinvigorate livable and vibrant communities, especially communities that have experienced a generation or more of disinvestment.

“We have a great opportunity to engage small and emerging nonprofits that are primed for growth and impact,” Traylor said. “With equity and sustainability at the center of Kendeda’s strategy, we hope to expand Atlanta’s network of transformative and bold community leaders. And through those leaders and organizations, we can begin to tip the balance from marginality and exclusion to well-being for all.”

Traylor believes these leaders will play a crucial role in piloting new models and programs that repair and heal. One of the greatest challenges, specifically as a Southern community, will be sorting through a culture and history that promotes (and at times rewards) social complacency and individual activism, but not collective action or organizing rooted in dismantling legacies of harm.

Because economic and demographic vibrancy exist side-by-side with poverty, underemployment, educational disparities and stagnant social mobility, The Kendeda Fund has identified a three-pronged strategy for advancing economic equity in the region. The foundation is focused on two primary areas of focus. The first is economic opportunity with an emphasis on:

The second priority is education: transformation dedicated to advancing options for children and families to have a high-quality education by supporting great schools, high-quality school-level talent, community engagement and supportive educational equity policies

As Atlanta grows and becomes more of a sprawling metro region than a city, transit is becoming more important than ever. It’s not just about being able to get from one place to another, it’s another way to think about economic opportunity, Traylor said.

In many ways, Atlanta’s current transit challenges pose barriers to shared prosperity, Traylor explained. “Housing prices have pushed many low-income workers to the south of the city, while the job hub is to the north. So there are substantial infrastructure challenges around fair access to employment – both in terms of how people initially get hired for a job, and then around how those same people can get to that job.”

The racial and historical context for Atlanta’s transit challenges reflect the broader themes within the city around systemic racism and access to public spaces. It is common knowledge in Atlanta (and attested to in scholarly research presented in the International Journal of Urban and Regional Research*) that MARTA, the region’s mass transit system, was for decades referred to inappropriately as “Moving Africans Rapidly Through Atlanta.” Political opposition to deeper and more equitable investments in transit infrastructure are of a piece with tacit approval for – and even sometimes explicit endorsement of – the state harassment of immigrant and LGBTQ communities.

As leaders like Traylor and the grantees in Kendeda’s Atlanta Equity portfolio begin to speak of transit access as an important piece of the regional development conversation, philanthropy is getting more engaged. Kendeda grantees such as The TransFormation Alliance are leading the equitable transit-oriented development conversations. A collaboration of private, public and nonprofit groups, the alliance works to ensure that the needs of low-income residents are represented, as pedestrian-friendly, mixed-use communities are built around rail stations.

“Equity issues are increasingly present in public education conversations among Atlanta-area funders, yet we haven’t really figured out how to do community development in a way that incorporates all of our players,” Traylor said. “It’s definitely a friendlier environment than it once was. The funding community is becoming more sophisticated and open to solving questions about increasing transit ridership or improving access to employment centers and services for all Atlantans.”

But the region’s philanthropic community still has more work to do on integrating an equity lens into every level of its transit, housing and economic development grantmaking.

“The funding community will certainly lag behind the organizing community, but when it comes to working on an issue that grantmakers feel they have a stake in, funders are finding ways to work together,” Traylor noted, pointing to a recent meeting that included foundations from across the “charity-to-systems change” spectrum.

“We recently participated in a conversation focused on economic opportunity with local funders such as Woodruff [Foundation], the Blank Foundation, the Community Foundation [for Greater Atlanta], Kaiser Permanente and Annie E. Casey [Foundation],” Traylor said. “It was a good group, a great meeting. And I remember thinking to myself: ‘Well that doesn’t happen very often.’ So I would definitely say there’s been progress.”

Traylor and Kendeda believe it is crucial for nonprofits and foundations alike to understand that Atlanta philanthropy – and Southern philanthropy more broadly – is not a monolith.

Grantee organizations and other foundations that fund structural change work in the Atlanta region should not expect all foundations to follow their lead, Traylor added.

Some Atlanta funders lack the structure, the staff experience and the board expertise to engage meaningfully and effectively in structural change grantmaking, she said. They serve a purpose, and when they are ready to partner on things that make sense to them, they will. But it would not be realistic to expect those foundations to be something they are not.

On the other hand, grantees and foundations ought not underestimate the potential for collaboration with some of the corporate foundations prevalent in Atlanta and the broader region.

“You’ll see [corporate foundations] show up in ways that doesn’t necessarily apologize for the things they do, but shows them in a different light,” Traylor said. “While I wish I could convert even half of these organizations into social justice funders, I do think the corporate community recognizes the income inequality gap. They recognize the challenges that flow from a lack of social mobility. And they recognize that the economic competitiveness of Atlanta can be challenged if we don’t all figure out ways to invest in community.”

But as public and private entities think about how to increase economic opportunities in Atlanta, Traylor also emphasizes that, in order to think about an economically viable Atlanta, we must also start to think about Atlanta as an expanding metro region.

“I don’t think you can talk about the city of Atlanta without talking about greater Atlanta,” Traylor said. “It’s hard to have a thriving city and not have a thriving region because they’re connected. We’re seeing a lot of growth in the surrounding counties; we are seeing leadership strengthen and evolve in those areas; and it is incumbent on foundations to move in a similar direction. We’ve got to encourage philanthropy to keep looking outward, beyond the city’s boundaries alone.”

Just as funders have learned how better to fund systems change work following the lead of power-building grassroots partners, Traylor also thinks social justice funders will be responsive to the nonprofits and intermediaries doing cross-county and regional work.

To that end, The Kendeda Fund and some of its peers have already begun investing in work that extends beyond the city of Atlanta, but it is just a beginning.